God will speak. Will you listen?

I fail to listen to God when He speaks to me all to often. The older I get the more I pray for guidance in discerning what it is He is telling me especially during dreams, words & visions. My husband once asked me "What makes you so special that God speaks to you?" I explained to him that every one of God's children has the power to connect with the Creator! I believe God desires to speak to all of His children -if they are open & willing!

My Spiritual Journal entries from January 2021- February 2021 listed below:

1/25/21: I was in church praying and had a vision of something collapsing and people running away from the collapsing building. I saw AOC running in fear.

Word: Teach
1/26/21 Word: Insurrection, Trump won
1/27/21 Revelation: Vision or "R" from last month is for Revival & reveal.In Church WORD: Focus on Me I will heal you.
1/30/21 Vision: My thoughts fought it but I saw chaos and shaking. Word: Dismiss
1/31/21 Dream: Allen and I watching a talk show in our bed at a hotel? The talk show had guests Hunter & Joe Biden along with Obama sitting next to them. They were playing a race game- who could come up with more black jokes. I kept thinking that this isn't funny -it's racist... don't the viewers see this? Everyone laughed and Joe started coughing a really dry & deep cough. Hunter asked his dad if he was ok but Obama ignored & talked into his watch. Vision: Jesus gave us His heart in His hand and then Trump.... Mary in background praying 🙏
2/3/21Thought/Feeling: Threatened senators... Family and lives being threatened
2/4/21 Vision: Light in darkness followed the flashlight beam and Jesus holding flashlight. Utter chaos things kept popping up & I couldn't make out anything. A map of world with countries or states Highlighted 8 19 or 819 (eight nineteen)
2/5/21 Heard an 🦅 while recapping my dreams/visions Vision; A girl 8-9 years old running from men in Business suits (assumed men) no faces just bodies. American flag/confederate flag , fighting angels , demons Typed 8 19 into Google and Romans 8:19 -21 came up. For creation awaits with eager expectation the revelation of the children of God for creation was made subject to futility not of its own accord but because of the one who subjected it in hope that creation itself would be set free from slavery to corruption and share in the glorious freedom of the children of God. Or Acts 8:19
2/7/21 Vision; American flag, fireworksWord (thought or coincidence?): April 4
2/8/21Vision: American flag, Trump, other business suit people. Word: In church deep in prayer heard : "My Child" and then a test bomb went off (Marine Corps Base nearby)
2/9/21
Reoccurring visions: American Flag, Shaking, Cross, heart in a hand.
2/10/21 Vision of big flag , Jesus stepped through it and it separated it. 2 flags restored
2/11/21 Word: adjudicated
Vision: gavel tapped , man in business suit could not see full face but looked like Trump.
2/15/21 Vision: Fighting demons crying out to Lord for help. Battle wonAnother Vision: 2 people getting married, Cross , Body of Christ in a monstrance American flag, papers ?? Things went black.
2/16/21 Dream: Went back to California but things changed...clouds in the sky represented aborted baby parts and there were so many.
2/18/21 Dream: Flooding ( but I failed to write it out Right away)
Revelation: Watched a History Channel video on Fatima from 2009. - Fire in 3rd secret is communism spreading all over the world. Started in Russia but trickled. Our lady will crush it before it happens.
2/19/21 Word; Piety ----- Fear of the LordConfirmed with video regarding 7 Spirits of God and in book 7 Gifts of the Holy Spirit
2/20/21: Word: 12
Vision: opened up front door and saw a baby body on the ground- blood everywhere & baby parts on the ground. I saw the pope or what I thought was pope being thrown to the ground.Word: Whatever happens you will be ok.
2/22/21 Vision: 2 people married in Catholic Church blessed by God unity candle.
2/24/21 Word: peril
word: God showed me DC is no longer DC??? Change is coming
2/27/21Vision: a Flag , words kept appearing but I could not make it out. Word : Intercessor
Dreams Visions Words Holy Spirit Spiritual Gifts Word of God Faith Jesus

Popular posts from this blog 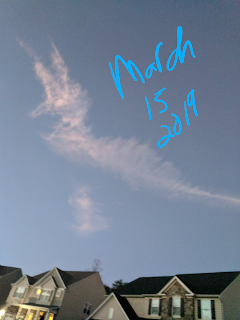 It was about this time that I began to experience not only revelations regarding current events but also visions! God put it upon my heart to keep a journal regarding any dreams, words, revelations & visions.  Trust me, I had no desire to be awaken in the middle of the night to log entries on to my phone- I'm a busy momma, tired & like sleep! I'm doing this because the Lord asked.   Please understand that during this time God has also shown me the difference between thoughts and "visions". I asked Him because I thought I was losing my mind! I do not know if there is any legitimacy or substance to any of these entries nor can I interpret them right now. Therefore I ask, as always, that you use discernment & pray!  He has poured out His spirit & gifts not just for me but for MANY during this season. I believe this is for one reason- that we know & understand WHO  is in charge.  "Be still & know that I am God!" Psalm 46:10 Dream     Word
Read more

May 18, 2021
Jesus said "Whoever walks with me will be joined with me in one glance" So that we made in His image become the most loving soul that we can possibly be!  Queen of Peace Media  Video A flame of love -  A Christmas Carol type of event !  Remember the Charles Dickens Classic - The Christmas Carol?  Ebenezer Scrooge was visited by 3 spirits famous Ebenezer scrooge? What if you were to experience a similar event that will be life-changing!  A Christmas Carol  recounts the story of Ebenezer Scrooge, an elderly miser who is visited by the ghost of his former business partner Jacob Marley and the spirits of  Christmas  Past, Present and Yet to Come. After their visits, Scrooge is transformed into a kinder, gentler man. Prepare yourselves by praying Jesus' Unity Prayer:  Jesus' Unity Prayer May our feet journey together. May our hands gather in unity. May our hearts beat in unison. May our souls be in harmony. May our thoughts be as one. May our ears listen to the silence tog
Read more